The herbarium of Babeş-Bolyai University

What is a scientific herbarium?

A herbarium is a collection of plants that are systematically stored, catalogued, and arranged for scientific study. Such a collection is assembled over time by a process involving pressing and drying plants in paper sheets so that most of the living plant features remain visible on dry specimens. The accompanying information is printed on a label, which in the most basic case should tell the place, date, and person who collected the plant.

A herbarium is a vast catalogue of plants where each of the specimens included provide unique information – where it was found, the morphological variability of the plant, preferred habitat, phenology (when it blooms or produces seeds), etc. Last but not least, due to the new techniques of DNA molecule analysis, herbaria are genuine gene banks that document the biodiversity of the plant world at the molecular level. The DNA, which remains intact for many years, is now extracted from herbarium specimens, thus providing information on plant relations and evolutionary processes.

About our herbarium (CL Herbarium)

The herbarium of Babeș-Bolyai University (CL Herbarium), located within A. Borza Botanic Garden, holds around 700,000 specimens in its collections. It is a first-rate scientific collection, being the largest of its kind in Romania, ranked 48th (out of 828 active herbaria) in Europe and 73th (out of 3,324 active herbaria) in the world (according to Index Herbariorum, 2019).

In line with the botanic tradition in Transylvania, dating back to the 18th century, the herbarium contains records of the entire plant heritage of Romania and much of the world’s flora. Besides plants (bryophytes, ferns, gymnosperms, and angiosperms) the herbarium also includes an important collection of algae, fungi and lichens. The most important collection in the herbarium is made of the plant holotypes. The specimen designated as the type (holotype) is the item selected by the author describing a new species, and which becomes the physical reference for the new taxon that will be thus known to the entire scientific community. CL Herbarium contains about 400 types identified so far.

The history of this important herbarium starts in 1873 when August Kanitz acquired a herbarium consisting of 53,047 sheets from the Transylvanian Museum Society. Although the Herbarium was founded only in the second half of the 19th century, many of the collections donated or purchased contained material dating to a much earlier date. An important example in this respect is the J.C.G. Baumgarten herbarium, added to the Cluj herbarium in 1900, but which includes plants harvested in Transylvania or other parts of Europe ever since the eighteenth century.

The actively engaged undertaking of hundreds of outstanding botanists led to the continuous growth of this collection. The Herbarium is still very active, a few thousand items being added each year to the collection. A constant effort is still being made towards the exploration of the Romanian territories where the flora is less known and where, much to our surprise, new plant species are still being discovered. Moreover, the active exchanges we maintain with other herbaria in the world enrich our herbarium with specimens of species that do not grow naturally in Romania. The collection is actively used to support research at Babeş-Bolyai University, as well as to serve hundreds of researchers around the world who visit it.

As a subunit of Babeş-Bolyai University, A. Borza Botanic Garden provides all logistical and scientific support in line with the university’s educational offer for systematic botany, floristics, vegetation, and plants, fungi, and algae diversity. These Read more… 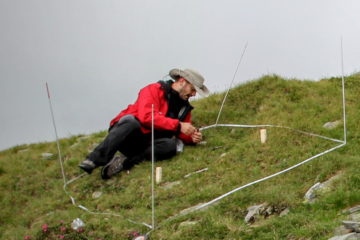 Research has always been at the heart of A. Borza Botanic Garden activities. Thus, ever since its beginnings, this institution became one of the most important national and regional centres for botanic studies in all Read more…