The statues of the botanic garden

The botanic garden has an important collection of statues created by various sculptors, in various times of its development.

The statue of professor Alexandru Borza was created in 1977 by the sculptor Virgil Fulicea (1907-1979). One of the most important scientific works in Romanian botany is linked to the name of the founder of Cluj Botanic Garden, the beginnings of the Romanian phytosociology, as well as the initiation of the first nature conservation projects in our country and the establishment of the first nature reserves and national parks.

The statue of the botanist F. Porcius was created by the sculptor Elaș Doina (1928 – 2014). Florian Porcius (1816-1906) was one of the most remarkable Romanian botanists, member of the Romanian Academy. He worked with Dimitrie Brândză on the flora of Dobrudja, being in charge with the nomenclature and synonyms, taxonomic keys, and writing of diagnosis data. He described various new species: Heracleum carpaticum, Centaurea carpatica, while others are named after him: Festuca porcii, Saussurea porcii.

The bronze statue of the poet Mihai Eminescu was created by the sculptor Oscar Han (1891-1976) and was offered to the botanic garden in 1935 by the municipality of Cluj-Napoca.  The statue was placed in a picturesque corner of the botanic garden, in the shade of linden trees that are a recurring theme in Eminescu’s poetry.

Ceres – the Roman goddess of agriculture, the statue was placed in the Roman garden. Ceres resulted from the combination of an ancient Italian agrarian deity and the Greek goddess Demeter. According to Latin sources, the Sabines called bread and grain ceres. The Romans celebrated her during the Ludi Cereris or Cerealia festivals in the month of April, venerating her as the protector of food and crops, teaching people agriculture techniques: sowing, harvesting, etc.

Young woman with a water pitcher – Statue placed on the platform of the Greenhouses complex, created by the sculptor Puskás Sándor (1928-2020), member of the Visual Artists’ Union of Romania, based in Târgu Mureș. The sculptor created numerous statues inspired by literature, history, ethnography, most of them located in squares and parks in various cities, as well as funerary monuments in the Cluj-Napoca Central Cemetery.

“The Great Lady of Călata”, a statue created by the sculptor Szeszák Ferenc (1881-1919) from Cluj, is located in the Systematic Sector of the botanic garden. The statue represents the woman who drew public attention to the folk art in the ethnographic area of Călata. Gyarmathy Hory Etelka, born in 1843 in Mănăstireni in the family of a pastor, learned as a child the art of sewing patterns from the Călata region. In 1864 she married and moved to Huedin, where she went on pursuing her passion for folk art. Through her craftsmanship in the art of embroidery, she introduced to the world embroidery patterns from the Călata region. 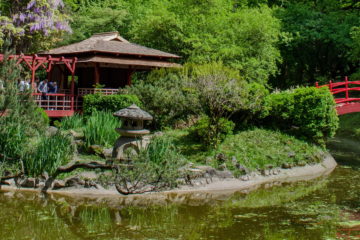 It was designed by Alexandru Borza in the intermediary traditional gyō nō niwa style. The central point of the Japanese garden is the teahouse built on a small lake and covered by a beautiful wisteria Read more…

Located in the Systematic Sector, it was used in the past as a reservoir for watering the botanic garden. Today it serves as an important observation point for visitors who can admire the diversity of Read more…