It was designed by Alexandru Borza in the intermediary traditional gyō nō niwa style. The central point of the Japanese garden is the teahouse built on a small lake and covered by a beautiful wisteria (Wisteria chinensis). There are many specific architectural features: two small waterfalls, a stone bridge leading to an island, a traditional Japanese curved bridge, stone lanterns, stepping stones – that make up paths which lead you through the garden, a stone fountain and a specific wooden shelter as well as a traditional torii gate.

This traditional Japanese architectural framework, which has been preserved in the botanic garden through time, features plants which are endemic to Japan and China. To mention just a few of its trees and shrubs: the Chinese redbud (Cercis chinensis) whose beautiful flowering occurs before it produces leaves, the maidenhair tree (Ginkgo biloba), situated at the entrance to the Japanese pavilion, various Magnolia species, etc.

Located in the Systematic Sector, it was used in the past as a reservoir for watering the botanic garden. Today it serves as an important observation point for visitors who can admire the diversity of Read more… 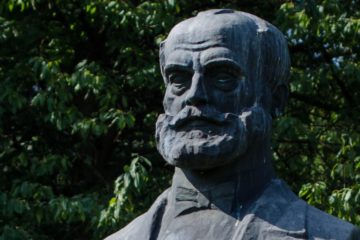 The statues of the botanic garden

The botanic garden has an important collection of statues created by various sculptors, in various times of its development. The statue of professor Alexandru Borza was created in 1977 by the sculptor Virgil Fulicea (1907-1979). Read more…